I'm in a nostalgic mood. I've just been preparing to move our last few Doublemu Limited clients off our server to their own hosting. And I've been pulling down various personal sites I don't have time to manage, or that never really amounted to much.

They were fun to write, and I learnt heaps. But there comes a point where you have to weigh up whether they're likely to come in handy again, and the cost of keeping them up. I must say, I feel clean.

Some I've redirected here. I plan to mark them 410: Gone a bit later.

I have some ideas for upcoming software projects. We'll see if they fare better. 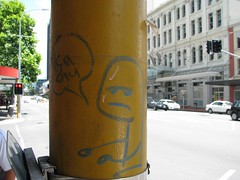 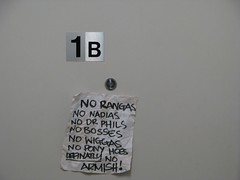 This was hanging on the downstairs apartment's door for about week.

Been reading and listening to a bunch of stuff lately. Very impressed by Emma Goldman's wonderful eloquence, entertained by John Zerzan's radio show, and set to wondering whether Bradford or her opponents would ever have considered quoting Kaczynski:

148. Other techniques strike deeper than the foregoing. Education is no longer a simple affair of paddling a kid's behind when he doesn't know his lessons and patting him on the head when he does know them. It is becoming a scientific technique for controlling the child's development. Sylvan Learning Centers, for example, have had great success in motivating children to study, and psychological techniques are also used with more or less success in many conventional schools. "Parenting" techniques that are taught to parents are designed to make children accept fundamental values of the system and behave in ways that the system finds desirable. "Mental health" programs, "intervention" techniques, psychotherapy and so forth are ostensibly designed to benefit individuals, but in practice they usually serve as methods for inducing individuals to think and behave as the system requires. (There is no contradiction here; an individual whose attitudes or behavior bring him into conflict with the system is up against a force that is too powerful for him to conquer or escape from, hence he is likely to suffer from stress, frustration, defeat. His path will be much easier if he thinks and behaves as the system requires. In that sense the system is acting for the benefit of the individual when it brainwashes him into conformity.) Child abuse in its gross and obvious forms is disapproved in most if not all cultures. Tormenting a child for a trivial reason or no reason at all is something that appalls almost everyone. But many psychologists interpret the concept of abuse much more broadly. Is spanking, when used as part of a rational and consistent system of discipline, a form of abuse? The question will ultimately be decided by whether or not spanking tends to produce behavior that makes a person fit in well with the existing system of society. In practice, the word "abuse" tends to be interpreted to include any method of child-rearing that produces behavior inconvenient for the system. Thus, when they go beyond the prevention of obvious, senseless cruelty, programs for preventing "child abuse" are directed toward the control of human behavior of the system.

He pretty much asks that very same question we may soon have to answer ourselves:

Anthony Lane is a film reviewer for the New Yorker – has been since 1993. Last year, he was named one of the top 30 critics in the world by The Economist. He seems like a pretty intelligent guy, and entertaining to read. It's a shame that, in his review of Watchmen, he shows he's prepared to let his standards go to hell in favour of a entertaining, but intellectually bankrupt, easy smackdown.

His review is seriously, amazingly flawed. He misses the point so often, and with such force, that it seems intentional. The whole thing really just makes you want to slap yourself on the forehead.

For a start, he makes the sort of mistake you'd expect from a twelve year old: he mistakes a character for the voice of the author. That might not be so bad, were it not for the subversive and satirical nature of Watchmen. Here's what he has to say about Rorschach:

You want to hear Moore’s attempt at urban jeremiad? “This awful city, it screams like an abattoir full of retarded children.” That line from the book may be meant as a punky retread of James Ellroy, but it sounds to me like a writer trying much, much too hard…

So, never mind the fact that Rorschach is intended to be a right-wing, paranoid, delusional nut; right there on screen he's called so by several characters. Never mind the fact that he's supposed to be self-aggrandising. Never mind that an important sub-plot is Rorschach's obsession with his own fictional identity, nor that he's an enlivenment of the hard-boiled cliché. Nah, it's easier just to pretend Rorschach is Moore's own little puppet and score an easy jab.

Oh, then Lane accuses Nite Owl of being a Bruce Wayne knockoff:

There is Dan (Patrick Wilson), better known as Nite Owl, who keeps his old superhero outfit, rubbery and sharp-eared, locked away in his basement, presumably for fear of being sued for plagiarism by Bruce Wayne.

Really? What an amazing idea! It's almost like Nite Owl was intended to be a stand-in for that type of superhero. What, with the animal-of-the-night, and the gadgets, and the batcave basement and everything. Nah, can't be. Surely Moore wouldn't be using a character to make a point. He's a dumb comic writer, right?

But really, I think Lane really takes his ignorance to surpassing levels with this:

Amid these pompous grabs at horror, neither author nor director has much grasp of what genuine, unhyped suffering might be like, or what pity should attend it; they are too busy fussing over the fate of the human race—a sure sign of metaphysical vulgarity—to be bothered with lesser plights.

Because, holy shit, that's the entire point of the comic. Ozymandias' arrogance, his willingness to toy with the suffering of millions for the sake of his grand plan for the future of humankind; that's what it's all about. That's the tragedy.

Fact is, I don't think there's really a character you can like in Watchmen. The main characters are all pretty deeply flawed. There's a psychopathic violent deviant, a soppy washed-up has-been, an equivocating alien sophist, a demented rapist, an arrogant egotistic smarmy asshole, etc. But that these characters are present doesn't mean the author has to share or affirm any of their flaws.

That's not to say the characters are completely unlikeable. In fact, I think the film and comic may have been easier for Lane to understand if that were the case. Dan has loyalty, Rorschach has a strong sense of objective, realist morality and the courage to stand up for it. Even the supposed eventual villain can be pitied for doing the wrong thing for the right reasons. The characters are people who are superheroes; we're not supposed to be looking for them to set our moral compass.

Anyway. That's my take. Here are some people who I thought had a better one:

It's been a while since I posted an update. I've been super busy working on the game with Glenn. We've frantically coding the 0.04 release. Check out where we're up to at codetactics.com.

I've tidied up some of the projects in my project page. I haven't been working much on my audio electronics projects, they tend to be expensive and at the moment I'm saving for a holiday. Working on Apollonia is a much cheaper hobby!

I've been playing a bit of PS3 lately, so I've added a project page that shows my gamer card. You can now check out my trophy collection and keep up with what I'm playing here.