Google Calendar supports SMS/txt reminders - a pretty handy feature. You can set it to remind you with a txt anywhere from five minutes to two days before an event. Or, you can use it to track responses to invitations you've sent, or changes to events you're attending.

The only problem is that, ostensibly, they only support the Vodafone network in New Zealand. But, luckily, if you're stuck with Telecom, it still works. Just chuck in your normal 027 phone number on the settings window.

It seems to be free, too. Well, I haven't been charged yet.

A while back I worked on making a dynamic node system; like the static one you see in this game, only movable. It used canvas tags (pretty state-of-the-art). I have it lying around somewhere. I wonder if I could make a clone (with attribution?).

Anyway. I've managed to get to six of the theme nodes. And I noticed you can merge games from the save screen. Anyone want to help out? Post your games in the comments.

Radio New Zealand Concert's "Podcast Classics" project is a brilliant idea. In short, each month features a new recording of the APO in concert, released by podcast. Last month, for instance, was Stravinsky's Rite of Spring. This month is Tchaikovsky.

The problem with Podcast Classics, though, is that the execution of the idea sucks. What if I'm not a Tchaikovsky fan? What if I really want to listen to that Stravinsky piece from last month? Well, you can't - because I lost the URL.

See, they seem to have missed the point of an RSS feed: you keep up with it at your own pace. Instead of adding to the feed with each month's new piece, they replace the whole thing. So, you can only ever download the current month's song.

There are other problems too. The mp3s are apparently for "personal use only" - fair enough. But what exactly does that entail? Can I share the files with my friends? (That's provided I don't make a business out of doing so - I'd be a pretty lousy friend.) Can I make derivative works, as long as they're used non-commercially? Can I remix the tracks with Jay-Z for my own amusement? There's a link on the podcast details page promising terms of use, but I can't find where they are on the linked-to page.

Anyway, you might find the following list of tracks I've been able to download (thanks Wayback Machine) interesting. If you find any others (especially the 200711 one), let me know and I'll archive them here.

Don't we pay these peoples' salaries? Well, yes. The APO claim only 4% of their funding comes from local government, but this has been recently raised (in the case of Auckland City Council by about $200,000). In addition, regional funding looks set to be given a major boost by the Auckland Regional Amenities Funding Bill, supported by both sides of the House, which will give $9 million spread between 11 regional groups, of which the APO is one. And that's in addition to funding through CreativeNZ (yes, that's public funding) and the ARC (which gives "support" - not sure if that's financial).

Edit: I sent a quick email to the webmaster, and the terms and conditions are now up:

These feeds are for personal use only. No audio or text may be posted to a web site, distributed to a third party or broadcast via any means including (but not limited to) radio, television and the internet without the express permission of Radio New Zealand.

All material is copyright Radio New Zealand or used by permission.

I've pointed out that the Wayback Machine goes against this policy.

The one month feed is apparently a condition of their contract with the APO. The webmaster said that, from next year, the files will be available on the feed for two months, and that the audio files will be purged from the server (they're not currently - hence the list of files above).

The SpikeTV Video Game Awards 2007 have a "most addictive game category". It's sponsored by Mountain Dew. And because of the stupid fuelled/pumped/cranked metaphors the MD guys are using, the category is named:

...just like that. All in one sentence, as if the game is fuelled, not the award. Of course, Halo 3 had to make it to the nominations - it was, in fact, the only game this year that had a fucking soft drink named after it.

Eastern-bloc alternative-folk-punk. I have a thing for that sort of thing. 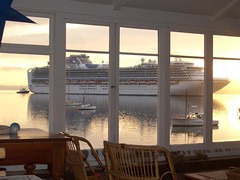 CIMG3092
I've just finished uploading a whole bunch of photos to flckr. This one, in particular, is amazing. Which makes sense: I didn't take it. Anyway, I thought it deserved a modicum of recognition for its awesome framing, focus and (dizzying) composition.

("A modicum is a very small amount!")

Shut the fuck up. Oh, shit, that wasn't a question.

House, M.D., says it about once per episode. Hard to get into the fiction that House is at all intelligent when you're continually slapped in the face with how dumb the writers are.

So, I officially live in Wellington as of Sunday 17th February, 2008.
And while I cannot wait to live there, there are things I'm going to miss about Auckland. These include:
So those are just a few. Or the few that have currently occurred to me.

All in all, I'm really looking forward to the move, though. I've lived in four houses, within a 7km circuit my entire life. I think Dom beats me, though - haven't you lived in the same house since you were born?

In other news, I'm no longer a high school student. Which should make most of you feel really old, considering that I met you in my 3rd/4th form - your last years of high school.

Does spelling and grammar have an effect on the information a text contains?

Closer to the question:

Warning: these instructions no longer work. For one, the madwifi archive is now contained as a .tar.gz within the source archive. Which makes things a little easier. The basic outline of what you need to do (replace the source, uupdate, dpkg-buildpackage) is the same, but don't try blindly following along with these instructions.

Up until a few weeks ago, your options for getting wireless working with a different distribution on the eee PC were limited. You could use the Windows drivers, in combination with ndiswrapper, or you could use the supplied kernel: 2.6.21.4-eeepc. That all changed after Atheros released the HAL the madwifi-ng guys needed to support the eee's AR5007 chipset.

I find it disatisfying to not use packaging. But I also don't want to use a tailored distribution like eeeXubuntu. Debian-based distros have a powerful, easy way of dealing with building from source (don't let Gentoo or Arch users tell you otherwise) and you should use it! Here's what you should do if you want to keep on using Ubuntu or Xubuntu, and you want a future-proof way of trying the new driver now. Here's the right way to do it:

Grab what you need:

$ mkdir build  # Because apt-get source puts things in the current directory, and we're going to have a fair bit of crap in there
$ cd build
$ apt-get source linux-restricted-modules-2.6.22-14-386  # Ensure you have a deb-src line for restricted in /etc/apt/sources.list first

Those downloads, together, should put you back a couple of hundred megabytes. I didn't say this was the most efficient way, just the best. I'd recommend doing all this on a different Ubuntu machine to your eee PC, if you have one lying around; things will build faster, and space is less likely to be an issue. Anyway, next up:

Now you have the source that was used to build linux-restricted-modules, only with a snapshot of madwifi, and a patch for the new HAL. All that remains is to get it built into a nice binary package you can ship off to your eee PC.

Getting it all to build:

$ dch -D UNRELEASED  # Optional - update the changelog with a description

The resulting .deb is 17MB. Otherwise I'd throw it up somewhere. Email me (my name at dubdot dot com) if you want it.

Buy my coke. I hope somebody does.

I'm in Ruakaka today. And tomorrow, I'll be in Parakai.

In the past few days I've finished Cat's Cradle, Breakfast of Champions and Watchmen. Next, I begin The Power and the Glory.

I have written down the premises of four dreams I have had. I sleep more than ten hours a day.

I have had two ideas for novels. One involves the subversion of a corrupt government by formerly allied nations. I haven't decided which nations: America coming to the rescue of Winston Smith, or a British-French assassination attempt upon a SuperNixon. Both seem fun. The other idea I have forgotten.